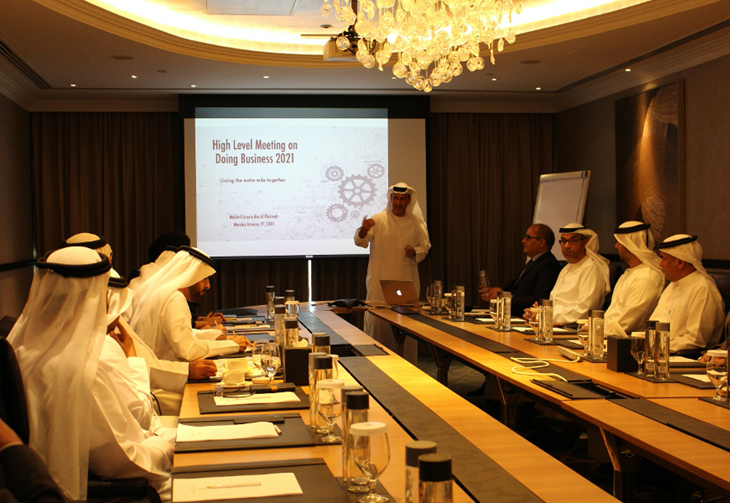 Furthering the productive partnerships and positive working relations that characterize Ras Al Khaimah government departments, the Sheikh Saqr Program for Government Excellence hosted a high-level meeting in Waldorf Astoria Ras Al Khaimah on Monday. Aimed at improving the competitiveness of the UAE at all levels, the meeting had a dedicated focus on promoting ease of doing business in the emirate.

Attended by the heads and general managers of Ras Al Khaimah’s government entities whose operations influence the World Bank’s ease of doing business index, the meeting saw the participation of the Federal Authority for Competitiveness and Statistics (FCSA), the Federal Electricity & Water Authority (FEWA), the General Pension and Social Security Authority (GPSSA) and the Ministry of Human Resources and Emiratization.

His Excellency Dr. Mohamed Abdullatif Khalifa, Director General of the Sheikh Saqr Program for Government Excellence, got the proceedings underway by welcoming the attendees. He then highlighted the meeting’s function as one of enhancing opportunities for advancing the emirate’s classification to world-leading levels in order to achieve the UAE leadership’s vision.

H.E. Hanan Ahli, Executive Director of the FCSA, also spoke during the meeting, reiterating the importance of cooperation between local and federal entities in general and specifically mentioning the electronic link project in the Emirate of Dubai, with the project planned to be extended to more sectors and ultimately cover the entire UAE.

Following these two presentations, the Municipal Department highlighted both the ‘Property Registration’ index and the ‘Building Permits’ index. The various presenters gave detailed explanations of their respective indices, their targets, the achievements their departments have made so far in ease of doing business, and the subsequent steps that need to be taken.

The meeting concluded with an open discussion in which the representatives of participating entities showed a spirit of cooperation to overcome identified challenges and obstacles.