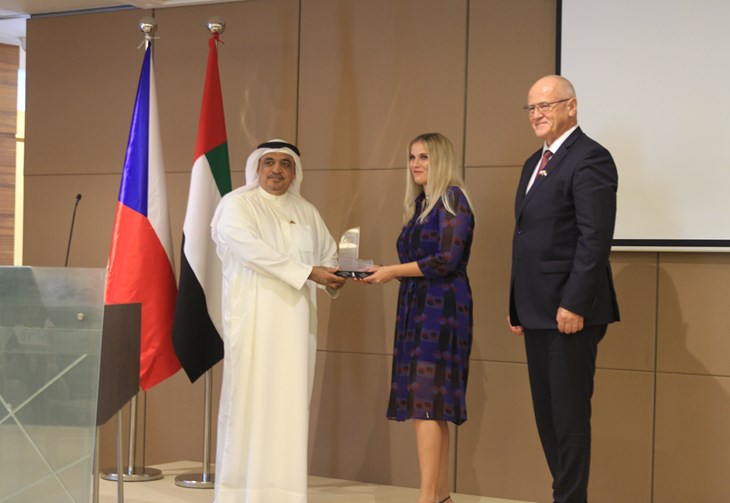 The Chairman of the Board of Directors of the RAK Chamber of Commerce, His Excellency Mohammed Ali Musabah Al Nuaimi, said that the UAE-Czech relations in general and the RAK-Czech relations in particular have huge potential for growth, highlighting the adoption of a number of new bilateral initiatives between the representatives of the Czech Embassy in the UAE and the RAK Chamber of Commerce to develop economic relations. The RAK Chamber of Commerce will receive delegations of Czech businessmen and representatives of the Czech chambers of commerce during the period that coincides with Expo 2020 Dubai, which will continue beyond the event, in order to visit industrial areas in Ras Al Khaimah and organize mutual meetings with national and resident businessmen and investors and members of the Saud bin Saqr Foundation for Youth Project Development. These initiatives aim to discuss ways of cooperation, identify opportunities for developing bilateral economic relations, explore investment opportunities available to both sides and ways of trade exchange in all fields.

The initiatives were adopted during the meeting of His Excellency Mohammed Ali Musabah Al Nuaimi, Board Chairman of the RAK Chamber of Commerce, and His Excellency Jiří Slavík, Ambassador of the Czech Republic to the UAE, accompanied by a delegation of businessmen and investors, at the Chamber of Commerce, in the presence of His Excellency Youssef Ismail, President of the Saud bin Saqr Foundation for Youth Project Development, Dr. Aisha Al-Qatami, Member of the Chamber’s Board of Directors, and Muhammad Hassan Al-Sabab, Acting Director General of the Chamber, and a number of the Chamber officials. Al Nuaimi invited the Czech Ambassador to visit the industrial areas in Ras Al Khaimah and form a delegation of Czech businessmen to visit the Emirate and explore the joint investment opportunities, pointing out that Ras Al Khaimah has advanced industries in various sectors, including but not limited to the pharmaceutical sector. The Emirate of Ras Al Khaimah controls more than a quarter of the pharmaceutical industry in the UAE, represented by the Gulf Pharmaceutical Industries Company (Julphar), which was established in 1980, making the company the first in the field of pharmaceutical industries at the level of the GCC countries. Ras Al Khaimah is also a pioneer in the “ceramic” industry, represented by RAK Ceramics, which operates 15 factories, ten of which are located in the UAE, and one in Bangladesh, Sudan, China and India, and exports 85% of its production to more than 160 countries around the world. Ras Al Khaimah also works in many other heavy industries.

On his part, the Czech Ambassador to the UAE discussed ways to enhance cooperation and strengthen relations between the Emirate of Ras Al Khaimah and the Czech Republic, stressing the strength and solidity of the relations between the UAE and the Czech Republic in all sectors and fields. Furthermore, the Czech Ambassador expressed his hope that the coming years will experience more development, growth and exchange of investment opportunities with the Emirate of Ras Al Khaimah, which can have a positive effect on the activation and revitalization of bilateral relations to achieve the mutual interests of both sides. In addition, the Czech Ambassador praised the economic and commercial boom achieved by Ras Al Khaimah during the mandate of His Highness Sheikh Saud bin Saqr Al Qasimi, Federal Supreme Council Member and Ruler of Ras Al Khaimah, thanks to the developments and the industrial shift witnessed during the past years and the Emirate openness to other world countries, which has been positively and tangibly reflected on the acceleration of economic development rates. The Czech Ambassador welcomed the invitation of the Board Chairman of the Chamber, stressing the necessity to activate and energize the trade exchange between Ras Al Khaimah and the Czech Republic and asserting that he aspires to have a real commercial exchange supported by competitive advantages, especially in goods and products that each party manufactures, in order to achieve a strong presence in the markets of each side. In this regard, the Czech Ambassador highlighted the necessity and importance of the participation of Czech institutions and companies in the exhibitions organized by the Saud bin Saqr Foundation for Youth Project Development, so that the UAE market get acquainted with the quality of Czech products and vice versa, and to find distribution outlets and agents in the Emirate, and to closely examine and explore these products. In addition, the Czech Ambassador invited the Board Chairman of the Chamber and delegations of businessmen in Ras Al Khaimah to visit the Czech Republic Pavilion at Expo 2020 Dubai.

On their part, the Czech businessmen delegation accompanying the Ambassador reviewed their projects, each in his sector, and welcomed the idea of entering the UAE markets in general and RAK markets in particular, and cooperating with their counterparts and discussing mechanisms for implementing joint projects between the two sides. In this regard, Czech businessmen pointed out that there are enormous investment opportunities in various industries to which the Czech side can contribute with its extensive experience in these fields, stressing that they are looking forward to explore the investment opportunities available in Ras Al Khaimah, in order to study the possibility of engagement, especially in the areas in which Ras Al Khaimah has attractive investment advantages. Moreover, Czech businessmen stressed the necessity of exchanging visits between trade and economic delegations, which include representatives of institutions and businessmen, as the most effective means of converging views and discussing various economic issues of interest to both sides.