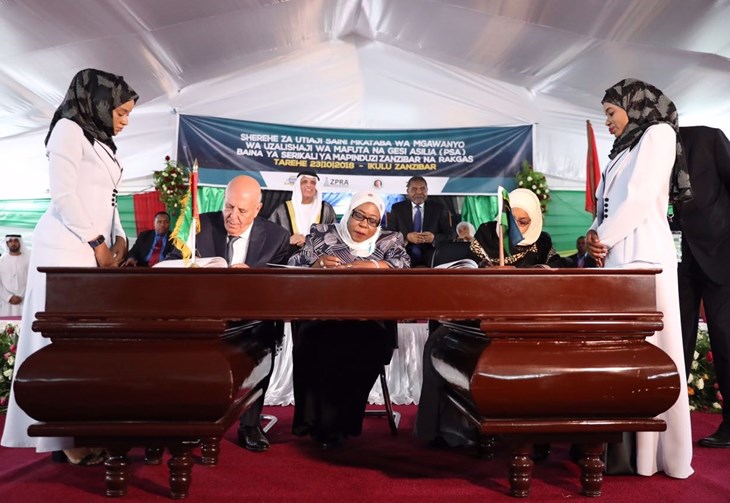 RAKGas, through its international subsidiary RAKGas Zanzibar Limited, has signed an oil and gas Production Sharing Agreement with the Revolutionary Government of Zanzibar, the first such agreement Zanzibar has signed following its implementation of the Oil and Gas (Upstream) Act of 2016.

Negotiations regarding the Production Sharing Agreement for the acreage known as Pemba Zanzibar Block, which measures 11,868 square kilometres, have now been concluded and RAKGas Zanzibar Limited is executing the agreement with the Zanzibar Government and the Zanzibar Petroleum Development Company.

His Highness Sheikh Saud bin Saqr Al Qasimi, UAE Supreme Council Member and Ruler of Ras Al Khaimah, arrived in Zanzibar after receiving a formal invitation from His Excellency President Dr. Ali Mohamed Shein of the Zanzibar Government to witness the signing of this historic agreement.

RAKGas L.L.C is a wholly Ras Al Khaimah Government-owned oil and gas exploration and production company established under Emiri Decree number 14/84 by the Ruler of Ras Al Khaimah. RAKGas has been pursuing exploration opportunities in the Middle East and Africa and this year opened a licencing round in Ras Al Khaimah to allow for prospective companies to bid for acreage.

RAKGas International Chief Executive Officer Kamal Ataya said: “This Production Sharing Agreement between RAKGas and the Government of Zanzibar is an important milestone for everyone involved and heralds a fruitful partnership between Ras Al Khaimah and Zanzibar.

RAKGas is proud to be the company to enter into Zanzibar’s first-ever exploration project.”