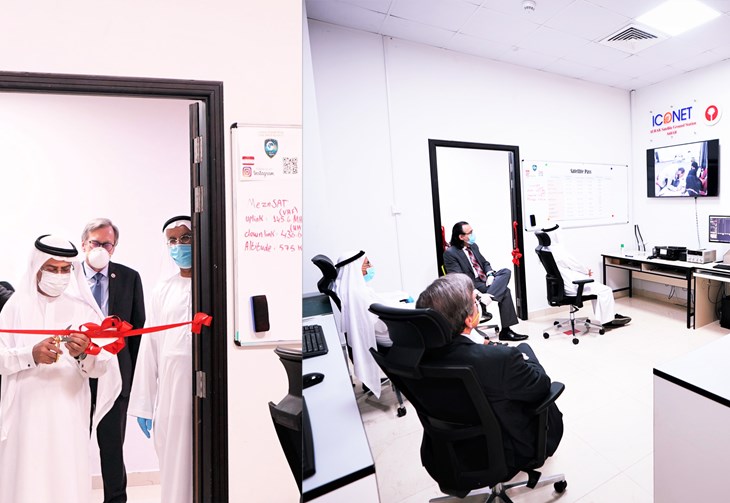 A ground station that will track and communicate with a satellite built by American University of Ras Al Khaimah (AURAK) students has opened on the University’s campus.

The ground station is capable of communicating with satellites in orbit by sending commands and receiving telemetry, images and science data back from them.

The satellite project is a collaboration between the UAE Space Agency, AURAK and Khalifa University of Science and Technology (KUST).

“The ground station was fully built by AURAK engineers and students. The station will be used to communicate with MeznSat, the university’s first nanosatellite. The ground station will also be used by faculty and students to track and receive data from other satellites,” said Dr. Abdul-Halim Jallad, Director and Assistant Professor, Center of Information, Communication and Networking Education and Innovation (ICONET).

“The opening of the AURAK Satellite Ground Station is another achieved milestone on the path of AURAK becoming a major hub in the area of space engineering in the UAE and the region. With the addition of the satellite ground station, the space lab at AURAK is now fully equipped with all major resources required to build and operate nanosatellites which also includes an ISO 7 cleanroom and other satellite ground support equipment,” Dr. Jallad added.

The satellite is scheduled for launch on a Soyuz-2 rocket from Russia in September 2020. When the satellite is in orbit, students will process and analyze the data from the newly opened ground station on the AURAK campus.

“I’m really proud of what our team and students, led by Dr. Jallad, have achieved so far. It’s an achievement for the country, not only for the university or the Emirate, and it shows how much this country, the United Arab Emirates, has advanced in this sector, education,” Professor Hassan said. “And now with the government emphasis on space, not only has an astronaut been sent into space, but there is also a satellite 100% manufactured in the UAE that is going to go into space.”

The MeznSat Nano-satellite is designed to detect greenhouse gas concentrations from orbit. Using a visible camera as well as a shortwave infrared spectrometer, it will measure the abundance and distribution of methane and carbon dioxide in the atmosphere. It will also provide information on the concentration of nutrients in the coastal waters of the Arabian Gulf. This will allow more

accurate predictions of algal blooms and support the timely implementation of precautionary measures.

MeznSat is the first student-built scientific satellite in the UAE. The project aims at providing the UAE space industry with qualified well-trained graduates through hands-on experience, while at the same time opening up opportunities for advanced space-oriented research relevant to the UAE.