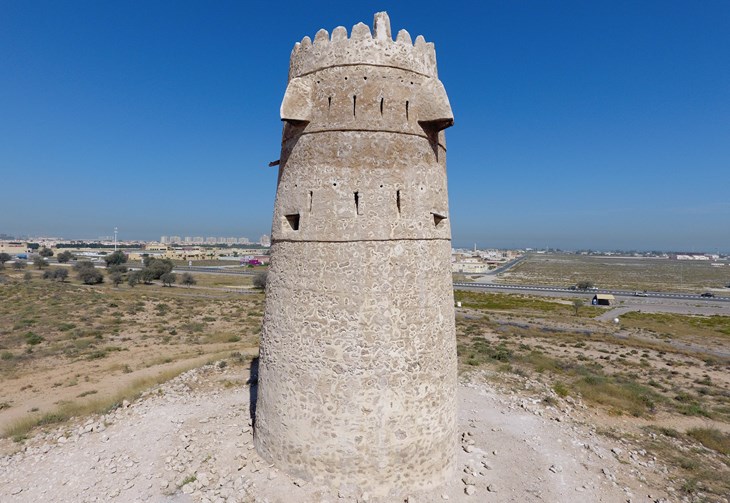 Ras Al Khaimah Department of Antiquities and Museums has completed major restoration works to one of the Emirate’s historic watchtowers.

Located just outside Al Jazirah Al Hamra – an ancient maritime village renowned for its fishing, pearl diving and boat building – the watchtower is about 100 years old and was a crucial part of the area’s defense system.

The tower was constructed using traditional materials, such as coral and beach stone, mangrove beams, and palm fronds. Situated on sand dunes back on the mainland, it guarded Al Jazirah Al Hamra’s water wells along with protecting the settlement, which was once an island, from attack. The restored tower is one of two standing to this day on these dunes.

Its use as a defensive fortification slowly declined from the 1950s with the advent of civil development, while Al Jazirah Al Hamra was connected to the mainland by the 1970s through land reclamation works.

Over the past few years, parts of the tower’s roof collapsed and some of its stonework fell into disrepair. The Department of Antiquities and Museums created a detailed record of its architectural features and decided on the repairs that needed to be done. Work began in April, with workers injecting a mortar made of traditional materials, such as lime, into the walls to stabilize the building.

“The traditional technique of wall-building leaves voids and gaps in the structure. The tower was built using the same technique, which is one of the reasons for its partial collapse,” said Ahmed Hilal, Director of Archaeology at the Department.

“No chemicals or modern materials were used in the repairs to reflect the original process and maintain the tower’s historical integrity,” said Mr Hilal. “We have also tried to avoid material containing salt, which is a major problem in many structures because it can cause corrosion.”

The restoration took about four weeks, with workers also rebuilding its roof, repairing its main door and rejuvenating some of its plasterwork.

“The 11.9-metre high tower is a classic example of a traditional defensive building,” said Mr Hilal. “Its restoration forms part of our mandate to safeguard Ras Al Khaimah’s priceless heritage and secure it for future generations.”

The Department of Antiquities and Museums is working on plans to open the tower to the public and thereby display a facet of the Emirate’s rich historical tapestry to a wider audience. Al Jazirah Al Hamra, meanwhile, has been the subject of a separate major restoration effort by the Department over the past few years.

The conservation efforts combined form part of a plan to document all traditional buildings in Ras Al Khaimah. More than 1,600 structures have been recorded and mapped as part of the Department’s plan so far, with 75 being towers. A number of these towers are similar defensive fortifications to the Al Jazirah Al Hamra building, while others are part of larger forts or civilian buildings.

Once the plan is complete, a digital database will be created by the Department showcasing all Ras Al Khaimah’s traditional buildings. More information on the Department’s work can be found at: www.rakheritage.rak.ae.