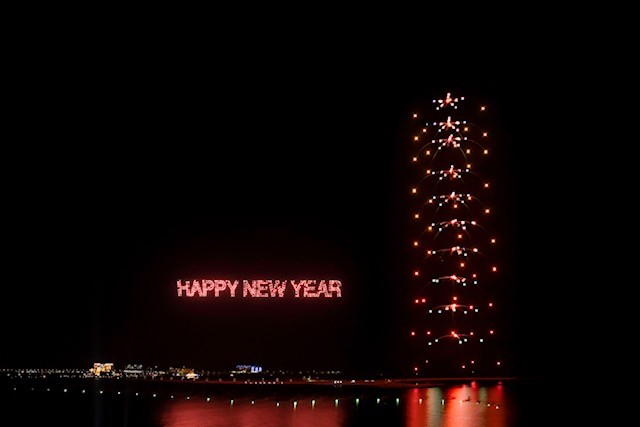 Welcoming hundreds of thousands of spectators from around the world, the Ras Al Khaimah New Year’s Eve Celebrations (#RAKNYE 2022) dazzled all with a never-before-seen fireworks display that smashed two GUINNESS WORLD RECORDS™ titles. Ushering in the New Year with a heightened spirit of positivity and optimism, the fireworks show was also a tribute to the UAE as it marks its 50th year of formation and an ode to Ras Al Khaimah’s growing stature as one of the region’s leading tourism destinations.

Rising majestically from the Arabian Gulf, the fireworks display featured innovative pyrotechnic drone performances, over 15,000 effects, spanning an area of over 4.7 kilometres. The 12-minute spectacle was specially choreographed to reflect the joy of reunion with six themes set to epic orchestral music. The symphony of lights and music provided the visitors, several of whom had been camping at designated spots with family and friends from the day before, one of the most enriching festive experiences.

A spokesperson of the organising committee said: “#RAKNYE2022 is our tribute to the leadership and people of Ras Al Khaimah and the UAE not only as we celebrate the 50th Anniversary of our nation but also in preparation for the Next 50 Years. Delivering the message of hope, positivity, resilience and confidence, the fireworks display, and the New Year’s Eve festivities brought together people again to celebrate safely. With this event, we once again underlined the reputation of Ras Al Khaimah as the leading tourism destination that welcomes visitors from across the world.”

A Six-Act Show of Wonders

#RAKNYE 2020 fireworks display was conducted in a six-act sequence starting with the countdown just before midnight setting the stage for an ephemeral theatre of wonder. Ushering in the New Year with a spectacular tower of lights at a height of 1,055.8 metres (over 1 km) taller than any building in the world. This was followed by the ‘Happy New Year’ message written in the sky with firework drones, the sequence lit up the arena in multiple hues. These two sequences broke two new GUINNESS WORLD RECORDS™ for Ras Al Khaimah.

The next sequence was a tribute to the UAE backed by orchestral music, celebrating the achievements of the nation and its people. The elegantly designed fireworks segued to the next act when hundreds of drones displayed the UAE’s 50th Anniversary logo with a brilliant display. What followed was another stunning show that defined the UAE’s ambition for the next 50 years.

The grand finale was in two parts – one a multi-colour display of lights followed by a super-massive expanse of white that illuminated the skyline of Ras Al Khaimah with the message of hope and ambition.

Setting the first GUINNESS WORLD RECORDS™ title for the ‘Highest Altitude Multirotor/Drone Fireworks Display’ was the tower of fireworks 1,055.8 metres high, taller than any skyscraper in the world. Using state-of-the-art drone technology, the specially designed fireworks was breathtaking in its scope and scale.

The second GUINNESS WORLD RECORDS™ title was for the ‘Most Remote Operated Multirotors/Drones Launching Fireworks Simultaneously’, when 452 drones launched fireworks simultaneously to create the ‘Happy New Year’ visual in the sky. For the feat, the organisers leveraged advanced pyrotechnics and integrated wireless technology, lighting up the shores of the emirate in majestic brilliance.

The fireworks shells for the show, with rapidly changing colours, were developed using a proprietary technology that continues to be closely guarded by the family-owned firework manufacturing business in Italy. More than 5,000 hours of work went into preparing for the show that also deployed over 130 sea pontoons and a fleet of hundreds of pyrotechnic drones.

The celebration was organised by following all social distancing protocols and other safety guidelines with the support of the National Authority for Emergency, Crisis & Disaster Management and the Ministry of Health & Prevention. Visitors had the opportunity to watch the festivities from special Viewing Decks along Al Marjan Island and Al Hamra Village. On-ground festivities which started earlier in the evening included live DJ music, food trucks, a kids’ village, lounge and a dedicated market area. The star-studded performance by sensational singer Guru Randhawa with several top DJs from the UAE kept the audience enthralled. More than 15,000 parking spaces were set up for visitors near the viewing/events areas. Many others followed the celebration live on raknye.com.

Ras Al Khaimah had welcomed 2021 with a dazzling 10-minute fireworks show that underlined the UAE’s message of hope, peace and achievements. Ras Al Khaimah also made history with the New Year’s Eve Gala of 2020, which broke the GUINNESS WORLD RECORDS™ titles for the ‘Most remote operated Multirotors/drones launching fireworks simultaneously’ and the ‘Longest Firework Waterfall.’ The Emirate secured two GUINNESS ORLD RECORDS™ titles for the ‘Longest chain of fireworks’ and the ‘Longest straight-line fireworks display’ with the 2019 New Year’s Eve Fireworks.