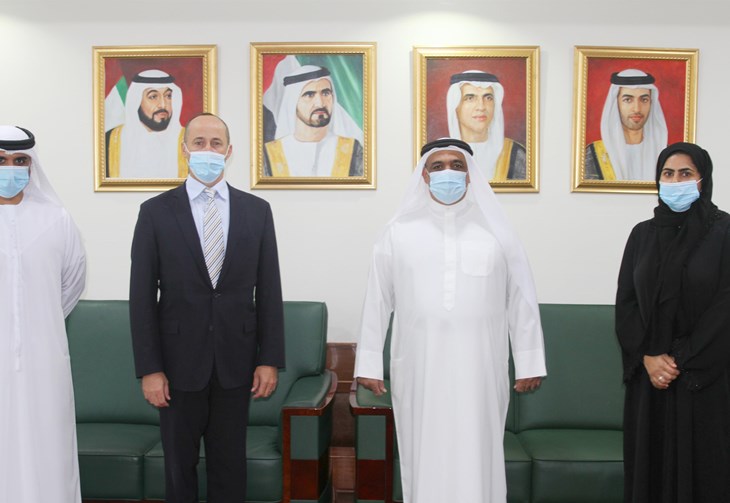 His Excellency Muhammed Ali Musabbah Al Nuaimi, Chairman of Ras Al Khaimah Chamber of Commerce and Industry (RAK Chamber), has stressed the importance of economic relations between Ras Al Khaimah and the United States of America (USA), highlighting that growth between the two areas has grown 67% over five years.

H.E Al Nuaimi said that the USA  is considered one of the most important trading partners for the Emirate, ranking as its second largest export market with a relative share of 9.3%. Further emphasizing the USA’s significance, His Excellency stated that the country was placed sixth in terms of the total volume of trade with the Emirate at 4%, with a value of more than AED 558 million last year. He also revealed that the number of US companies in Ras Al Khaimah stands at 113 practicing 248 activities, distributed between – among others – trade and repair services, manufacturing, real estate, leasing, transportation and storage, hotels and restaurants, construction, community services, education, finance, agriculture and mining.

The information came during a meeting at RAK Chamber’s headquarters between His Excellency, the Chairman of the Board of Directors, and His Excellency Thomas Bruns, Commercial Counselor and Regional Adviser for Commercial Affairs in the Gulf Region at the Embassy of the United States of America. The meeting was held in the presence of Muhammad Hassan Al Saba, Acting Director General of RAK Chamber, and Iman Al Hayas, Assistant Director-General for the Commercial Services and Business Development Sector, as well as a number of Chamber officials.

With the event held to review mechanisms for developing means of economic cooperation between the US and Ras Al Khaimah, Al Nuaimi pointed out the importance of linking the private sector between the two in a way that contributes to supporting economic relations in sectors of common interest. He added that that the Small and Medium Enterprises Exhibition that was held in Ras Al Khaimah in November last year was an influential event for improving commercial relations for small and medium enterprises (SMEs) between Ras Al Khaimah and companies in an array of countries, particularly those from the US that had participated in the exhibition. He highlighted that RAK Chamber hosts one of the most prestigious international awards, the Middle East Stevie Awards, which supports the development and growth of SMEs, with companies from 26 countries taking part. His Excellency outlined that part of the future vision of the Emirate over the coming years is to ensure that companies from across the globe are attracted to the location and that business stakeholders are provided with everything they need to guarantee the sustainable growth of their company.

For his part, Thomas Bruns praised the development of Ras Al Khaimah over the last 10 years and the economic boom that it is experiencing as a result. He said that he looked forward to furthering the economic partnership with Ras Al Khaimah and expressed his appreciation for the continuous progress made by the Emirate in implementing open investment and economic policies, as well as its endeavors to enhance its role as one of the most dynamic and rewarding investment destinations in the region. He stressed the importance of working together to organize a future virtual event that includes the business community of the two sides for viewing and exchanging investment opportunities.