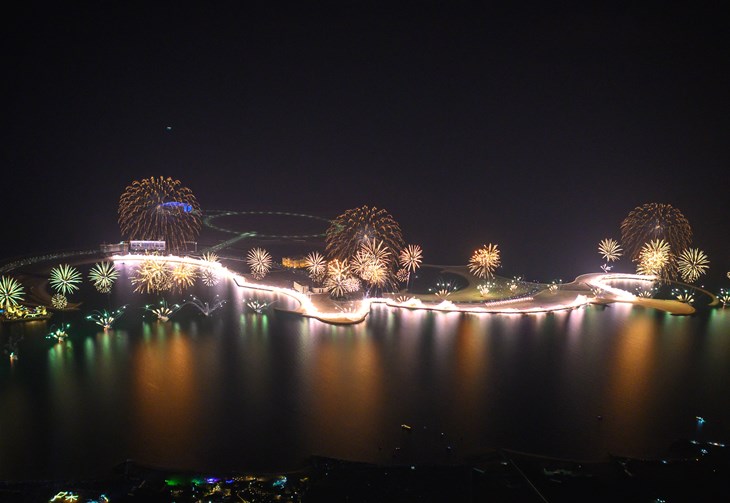 The world’s eyes were on Ras Al Khaimah as it captivated people all over with a spectacular New Year’s Eve Gala that set two GUINNESS WORLD RECORDS™ titles. Hundreds of thousands of spectators, including international tourists, witnessed the 13-minute long fireworks that also reached billions of people through live feeds online and simultaneous live telecasts by television networks across the world.

The first record was for accomplishing a captivating firework display with the use of 173 PyroDronesTM, all executing a seamlessly created firework display, simultaneously. The fireworks ushered in the New Year by creating a visual ‘2020’ in the sky followed by an elegant chandelier draped with a beautiful cascade of pyrotechnic sparks ending with the recreation of the monuments of Ras Al Khaimah. The display leveraged advanced pyrotechnics and integrated wireless technology lighting up the shores of the emirate in majestic brilliance.

The second record for the ‘Longest Fireworks Waterfall’ at 3,788.86 metres trumped the existing one set in Fukuoka, Japan, which was for a length of 3,517.23 metres. The fireworks, at least 28 cm long and 3 cm in diameter, were hung across the 3,788.86 metre length, creating one of the most amazing fireworks displays that created a spellbinding effect on the audience. It also served as the grand finale of the event.

Crowds thronged the main venue of Al Marjan Island, the flagship residential and hospitality development by Marjan, the master-developer of Ras Al Khaimah, from early in the evening as well as at viewing decks along Al Hamra. Several family activities and food stalls engaged audiences until the countdown to the New Year and the fireworks display.

A spokesperson of the high-level organising committee of the Ras Al Khaimah New Years’ Eve Gala said: “Ras Al Khaimah is in the global spotlight with the New Year’s Eve Gala, which has added to the position of our nation and welcomed hundreds of thousands of guests for one of the most spectacular events to usher in 2020. The event underlines the vision of Ras Al Khaimah’s leadership to position the emirate as one of the world’s first choices for New Year’s Eve celebrations. It is a message of peace and harmony from the UAE to the world, and aims to inspire positivity and happiness among people. In addition to setting the two GUINNESS WORLD RECORDS™ titles, our New Year’s Eve Gala will have a phenomenal legacy effect as it defines Ras Al Khaimah as a leading tourism, retail and leisure destination in the region, offering exceptional opportunities for investors to work, live and entertain. We thank all our partners and the people who attended for making the event a spectacular success.”

The entire fireworks event as well as several on-ground activities were live-streamed at raknye.com and watched across the world on local, regional and international television channels.

The spectacular New Year’s Eve Gala can be watched online at raknye.com. Follow @rakmediaoffice on social channels for more details.

FACTS AT A GLANCE