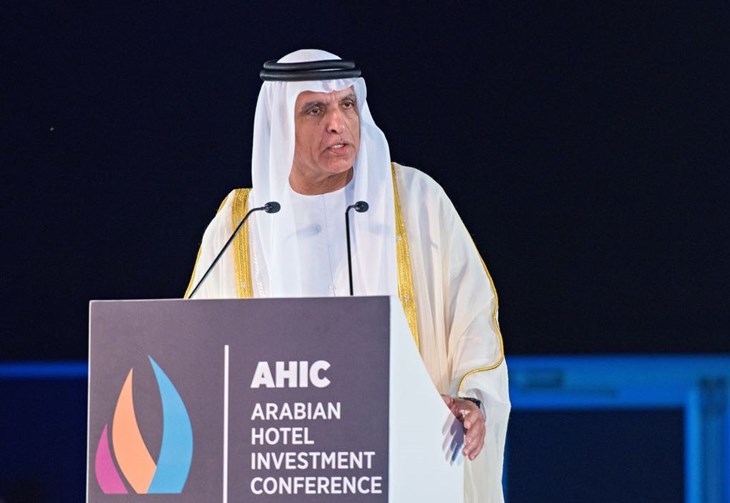 The annual knowledge and networking platform for the hospitality investment community, being staged at the purpose-built AHIC Village on the beach at Waldorf Astoria Ras Al Khaimah, welcomed more than 800 leading hospitality figures from across the globe.

“In a relatively short period of time, Ras Al Khaimah has changed from a quiet, agricultural town, where a formal education was hard to come by, to become a thriving Emirate.

“Our economy has been growing steadily at a rate of between 5 and 7% in each of the past 5 years. That is because, among other things, we have small set-up costs, affordable accommodation, numerous trade agreements in place and a great location.”

H.H. Sheikh Saud said that tourism only contributes 5% to Ras Al Khaimah’s overall GDP, compared to the biggest sector, manufacturing, at about 30%, but that the dynamics were changing.

“We aim to increase tourism’s GDP contribution to 10% by 2025,” the Ruler said. “Already, the sector has been growing at a rate of about 19% year-on-year.

“We will have 1 million visitors by the end of this year in Ras Al Khaimah and we have an achievable target of 2.9 million per year by 2025.”

During AHIC in Ras Al Khaimah, which is the highest-attended conference in its 14-year history, His Excellency Mohamed Alabbar, Founder and Chairman of Emaar Properties, announced the launch of his company’s first hotel and residences project in Ras Al Khaimah.

AHIC is returning to Ras Al Khaimah in 2019, from April 9-11, with an array of high-level speakers and panel discussions.