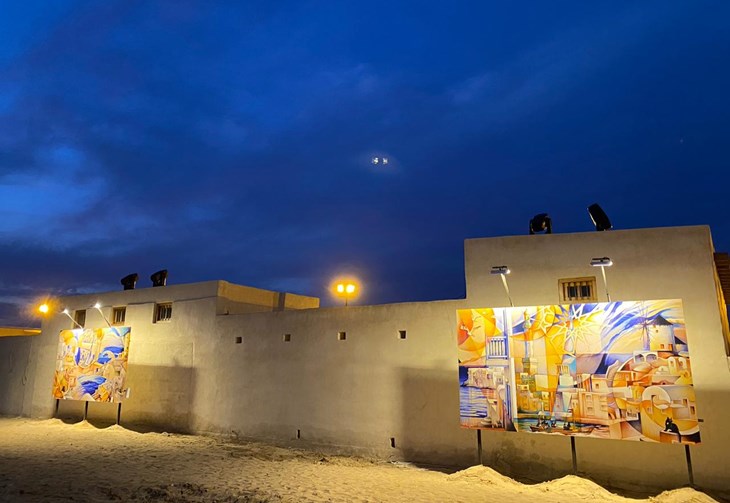 The 8th edition of the Ras Al Khaimah Fine Arts Festival (RAKFAF) opens to the public at 8pm tomorrow, Friday 31st January, at the Al Jazirah Al Hamra Heritage Village – a recently restored pearling village dating back to the 17th century. Established under the patronage of His Highness Sheikh Saud bin Saqr Al Qasimi, UAE Supreme Council Member and Ruler of Ras Al Khaimah, this year’s festival will showcase the talent of more than 100 local and international artists under the theme of Connected Communities. Art-lovers and culture-seekers will be treated to an evening of art and community celebration. The highly anticipated grand opening will be attended earlier in the night by His Highness Sheikh Saud bin Saqr Al Qasimi, ambassadors, dignitaries, festival partners and local and international artists.

Speaking ahead of tomorrow’s opening, His Highness Sheikh Saud said: “It is a matter of enormous pride to see the 8th edition of the Ras Al Khaimah Fine Arts Festival come to life, putting the Emirate centre stage of the local and regional art scene. This year, the festival celebrates values we hold dear in the UAE. It speaks to the true meaning of inclusion, tolerance, and cooperation, all of which have empowered us as people – as connected communities – to truly fulfil our potential and lead inspired, productive, happy lives.”

He added: “The theme of this year’s festival is a timely one, as we are living in an increasingly connected age in which the world is becoming more of a global village. I sincerely hope guests will embrace the festival as a platform for meaningful cultural exchange.”

Suqrat bin Bisher, Director of the Ras Al Khaimah Fine Arts Festival Arts, and Arts & Culture Manager of the Al Qasimi Foundation, commented: “What started as a modest initiative to support and promote local talent eight years ago has now flourished into an expansive annual event. Over the years, the festival has had a profound impact on the community of Ras Al Khaimah and its artistic, cultural, and collective identity. I am thrilled to showcase Ras Al Khaimah and welcome art connoisseurs, residents, and visitors alike to take in the sights and get to know one another.”

The immersive outdoor art and sculpture exhibition will feature more than 150 original pieces, set against the striking backdrop of Al Jazirah Al Hamra Heritage Village, and will combine the regional charms of an increasingly thriving local UAE art scene with internationally renowned artists.

International photographer Kiliii Yuyan is the festival’s 2020 Honorary Visiting Artist, whose  participation has been supported by a grant from the U.S. Mission in the UAE. A number of works by Yuyan, an award-winning Chinese-American contributor to National Geographic Magazine and other major publications, will be on view in an eye-catching exhibit about the Arctic, its indigenous peoples, and environment. Yuyan, who speacialises in Arctic photography and indigenous issues reveals the hidden stories of the polar region, its wilderness and communities. He will host a free public workshop on February 1st as well as a number of talks and classes for local students during his time in the UAE.

Other leading international names to feature in the festival are:

RAKFAF, which also presents the work of numerous local and regional artists, seeks to support the social and cultural development of Ras Al Khaimah and the UAE by nurturing emerging talent and fostering the recognition of the importance of creativity in society.

Among the leading Emirati names to feature will be Azza Al Qubaisi, Mohammed Al Suwaidi and Nesa Al Shehhi – three exciting Emirati designers who have collaboratively curated a unique visitor experience to highlight universal themes that evoke a sense of shared understanding. Additionally, the work of Emirati artist Noora Al Shehhi, who is one of the award winners at last year’s festival, inspired the visual identity for this year’s theme. Other notable GCC artists include Om Kalthoom Al Alawi from Saudi Arabia and Kuwait’s Ahmad Al Hussaini, Sara Saud and Shouq Bahzad.

Emirati filmmaker Hamad Abdullah Saghran, this year’s recipient of the Ras Al Khaimah Fine Arts Festival Film Grant, will also be screening his short film, And What’s Next? on the last Wednesday of February and March. In total, 20 short films and documentaries will be screened on a rotational basis at VOX Cinemas in Al Hamra Mall over the course of the festival.

The festival program also includes a full schedule of events and activities over the coming two months. Highlights include the People of Ras Al Khaimah, Migration and Belonging book talk and food tours, the Jewellery Making: Cuttlefish Silver Casting, Mosaic Tile Art (Year of Tolerance), and The Art of Clay workshops.

RAKFAF is free to the public. To attend any of the workshops, activities, tours, or film screenings, reservations should be made directly through the RAKFAF app by following the “Register” pathway, or by visiting register.rakfinearts.ae.

The 8th edition of RAKFAF is presented by Marjan and supported by additional local partners including Stevin Rock LLC, Ras Al Khaimah Tourism and Development Authority (RAKTDA), the Department of Antiquities and Museums, Government of Ras Al Khaimah, and the Ras Al Khaimah Public Works and Services Department.

Abdulla Al Abdouli, CEO of Marjan, the festival’s Presenting Partner, said: “We are honoured to partner with the Ras Al Khaimah Fine Arts Festival, which adds to the reputation of our Emirate as a region’s leading cultural and tourism destination. As we celebrate our status as GCC’s Tourism Capital, the festival will offer visitors enriching experiences. Its theme, Connected Communities is a perfect fit to our vision and mission at Marjan to strengthen the spirit of togetherness and enhance the lifestyle of the people – both residents and visitors from across the world. Much like Marjan, which is ‘inspired by the land’, we see the Festival as a true reflection of the rich, glorious heritage of our emirate.”

For more information on the festival, please visit www.rakfinearts.ae or follow on Facebook, Instagram and Twitter. The interactive and easily accessible RAKAF mobile app can also be downloaded via Google or the Apple Store.