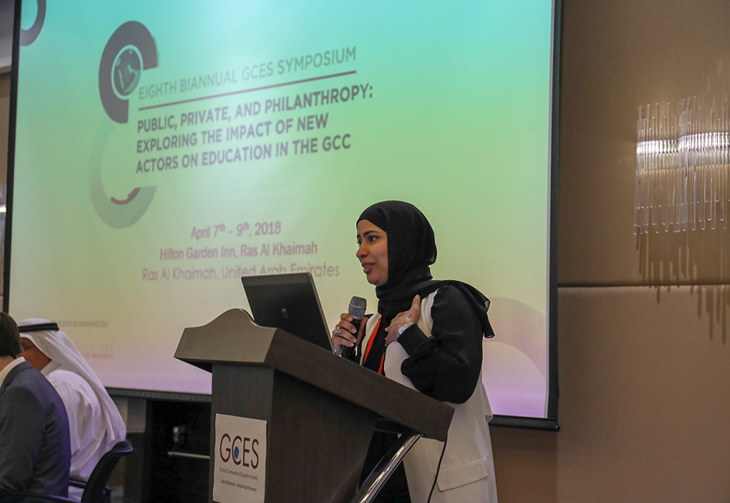 Building on three days of conversations, the Gulf Comparative Education Society (GCES) closed its Eighth Biannual Symposium with a special panel chaired by UNESCO that included representatives from the United Nations Development Program (UNDP), Arab Gulf Program for Development (AGFUND), and the Sheikh Saud bin Saqr Al Qasimi Foundation for Policy Research. The panel highlighted the critical need for partnership among public, private, and philanthropic actors in order to achieve the United Nation’s Sustainable Development Goals (SDGs), in particular SDG4, which seeks to ensure an inclusive and equitable quality education for all.

Frode Mauring, the United Nations Resident Coordinator and Development Program Representative to the UAE said the SDGs are more than what preceded them, the Millennium Development Goals (MDGs), which were often perceived as only relevant for developing countries.

“The Sustainable Development Goals are more universal and will require more people, more knowledge, and more awareness if we are to be successful. High income countries are not an exception to them,” he said.

The panel went on to explore ways in which public, private, and philanthropic actors could begin to work together and take action given their unique roles and contributions they make in societies at the national level of individual countries.

“Being in the Gulf there hasn’t been a lot of discussion historically about the MDGs or SDGs except at higher government levels,” said Dr. Natasha Ridge, the Executive Director of the Sheikh Saud bin Saqr Al Qasimi Foundation for Policy Research. “I think as a philanthropic organization based in the GCC, it’s good to start bringing that conversation into actual grassroots organizations. The SDGs give us the framework to have conversations about education that transcend class, transcend race, transcend gender.”

The panel’s reflections helped bring the symposium’s theme, “Public, Private, and Philanthropy: Exploring the Impact of New Actors on Education in the GCC,” full circle and connected many of the comments, insights, and research shared through the event’s more than 40 presentations.

Prior to the symposium’s formal closing, GCES was pleased to announce Dr. Ahoud Alasfour, Assistant Professor at the College of Basic Education, Public Authority for Applied Education and Training (PAAET) in Kuwait, as its new Vice President-Elect. Dr. Abdullah Alajmi, Assistant Rector of Administrative and Financial Affairs at Arab Open University, is the current GCES President.

The Eighth Biannual GCES Symposium was sponsored by the Sheikh Saud bin Saqr Al Qasimi Foundation for Policy Research. The next symposium will be scheduled in 2020. For more information about GCES please visit: http://gces.ae.