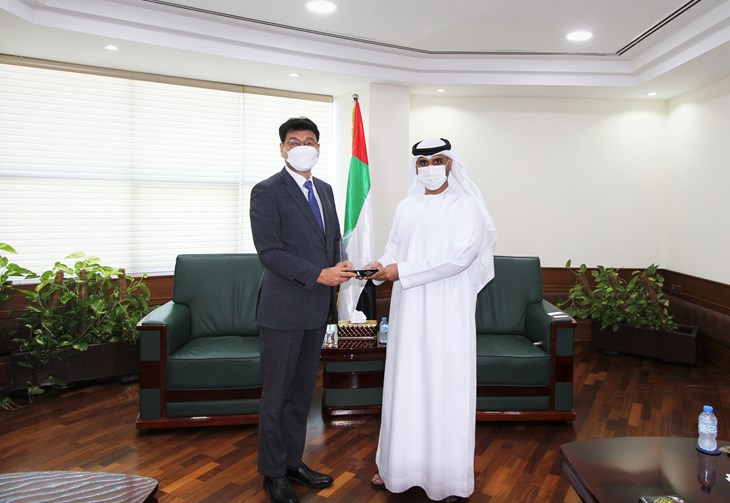 Mr. Muhammad Hassan Al-Sabab, Acting Director General of Ras Al Khaimah Chamber of Commerce and Industry, received, at Chamber’s premises, His Excellency/ Moon Byung Jun, Consul General of the Republic of Korea in Dubai and a delegation of businessmen accompanying him. Officials of Ras Al Khaimah Chamber and their Korean counterparts discussed ways to enhance cooperation and trade exchange in Ras Al Khaimah and the prospects for developing such ways in a manner contributing to strengthening areas of joint trade and investment cooperation.

At the beginning of their meeting, Acting Director General of Chamber, Mr. Mohamed Hassan Al-Sabab, wished the new Consul General success in performing his duties in a way that enhances the close cooperation relations between the United Arab Emirates and the friendly Republic of Korea.

Mr. Al-Sabab reviewed the range of pioneering services that the Chamber provides to its members, as well as the innovative initiatives implemented by Ras Al Khaimah Chamber in order to support areas of economic activities, pointing out that the Chamber is fully prepared to intensify mutual cooperation and enhance trade and investment relations in various sectors, in a manner that serves both Korean an UAE’s business environment and investors. Mr. Al-Sabab also called on businessmen and all Korean companies that have operated industrial, business and service activities to participate in the exhibitions organized by Saud bin Saqr Foundation for Youth Project Development of Small and Medium Enterprises, pointing out that such exhibitions have become the world’s window to the common future and constituted for participants and visitors the most extensive sector for people looking for a world vision including the economic and the technical areas.

Korean consul expressed his happiness at representing his country in the UAE, pointing to the prestigious position regionally and internationally occupied by the UAE and stressed the importance of continuing practical efforts to strengthen relations of cooperation between the two friendly countries in all fields, especially the economic and trade ones. His Excellency/ Korean Consul promised to work in the future to organize reciprocal meetings between businessmen from both countries, provided that the trade exchange is not satisfied only. He has welcomed the opening of channels of exchange and cooperation with medical institutions in Ras Al Khaimah.