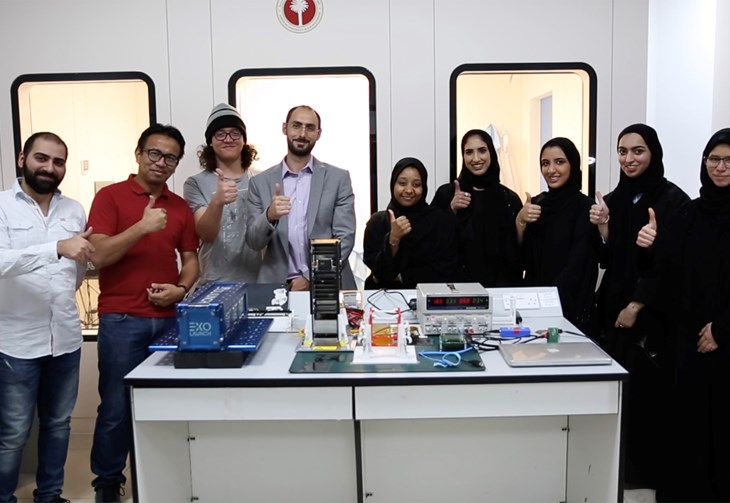 The launch of the MeznSat satellite is a noteworthy accomplishment and a significant contribution from Ras Al Khaimah to the UAE’s position in the global space sector, asserted the American University of Ras Al Khaimah (AURAK) following the official announcement that the MeznSat launch was a success.

Sixteen students from the American University of Ras Al Khaimah are celebrating the successful launch of their self-built MeznSat satellite, which will orbit the Earth collecting data on greenhouse gas concentrations and monitor the occurrence of red tide algae in the Arabian Gulf. The project reflects the University’s commitment to support its students and develop their skills.

Sponsored and supervised by the UAE Space Agency, MeznSat was developed by AURAK in collaboration with Khalifa University in Abu Dhabi. The satellite is the first student-built satellite in the UAE.

Professor Hassan Hamdan Al Alkim, President of AURAK, said: “The MeznSat launch is a great achievement for the American University of Ras Al Khaimah and I am extremely proud of the dedication, effort and skill shown by the students. This moment is the culmination of three years of hard work and it shows the capability and professionalism of our students.”

“The wise leadership of the UAE has placed the nation’s space program at the forefront of its vision for the future and this launch marks another achievement in this field,” added Prof. Al Alkim.

Dr. Abdul-Halim Jallad, a faculty member at AURAK’s Engineering School, has led the project since its inception. He, too, spoke of his pride in seeing the satellite launch successfully.

“I am thrilled for the students, as this MeznSat project has been a big part of all our lives and to see the launch go so well is just reward for their efforts,” Dr. Jallad said.

“This MeznSat project has been a journey for the students, both in an educational sense and in terms of their own personal development, and I know that each of them will go on to achieve their career goals, as they are an intelligent and hard-working group,” Dr. Jallad concluded.

MeznSat was launched in a Soyuz-2 rocket from Russia today. It will orbit the Earth 565km above sea level on a mission expected to last three years. A ground station at AURAK’s space lab will monitor its movements and collect data that will be sent to Khalifa University for analysis.

MeznSat was devised to provide the space industry in the UAE with well-trained graduates who have practical experience, while also creating opportunities for advanced space research. Through this project and future projects, AURAK aims to become a major center in the field of space engineering in the UAE and the region.